Soil organisms fulfil a relevant task in forest ecosystems: they decompose organic matter, making it available again for uptake by plants and animals. Soil organisms include fungi, algae, bacteria, lichens, insects, earthworms as well as small vertebrates like moles and mice. There are some specialists being highly important for forest ecosystems, such as mycorrhiza and earthworms that we address in this section.

Most trees in temperate forests associate with symbiotic fungi, the so-called endo- and ectomycorrhiza. These fungi colonize fine roots and supply water and nutrients like nitrogen and phosphorus to the tree. In return, they receive carbohydrates produced by the tree during photosynthesis. Moreover, these fungi protect the roots from pathogens and increase resistance to drought. Therefore, this symbiosis between trees and fungi is a highly important factor for forest health. 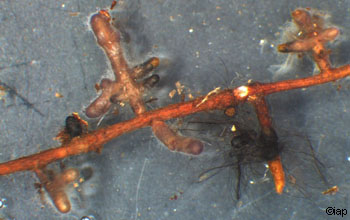 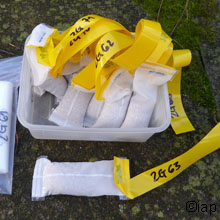 Left: Ectomycorrhizal fungi on beech roots supplying the tree with water and nutrients.
Right: Ingrowth bags filled with neutral quartz sand are used to investigate the growth of fungal mycelia in the soil.

Soil acidification, increased nitrogen deposition and ozone alter the symbiosis between trees and mycorrhiza. The fungal diversity is strongly altered and community composition is changed. This has serious consequences for the uptake of water and nutrients and the susceptibility of trees for soil pathogens. We observed relationships between species composition of ectomycorrhiza on beech roots and foliar nutrient concentrations.

Earthworms play an important role in terrestrial ecosystems and considerably influence soil structure and formation by incorporating the litter of trees and herbs into the mineral soil. Furthermore, they mix the soil thoroughly, form aggregated crumbs, ameliorate the water holding capacity, and enhance aeration and drainage. 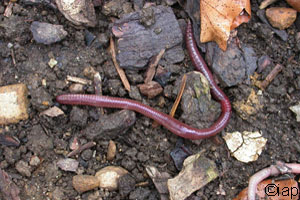 Earthworms like the deep burrowing Lumbricus terrestris
are important for an intact forest soil.

In our permanent forest observation plots, earthworm populations decrease with increased soil acidification. Below a soil pH of 4 only litter dwelling species are found which are much less involved in soil turnover.

Number of earthworms per m2 in the permanent forest observation plots.