Shoot growth of trees is sensitive to environmental stress. We harvest shoots from the upper crown every four years by helicopter and measure their growth retrospectively, see tv report. Leaves are processed for nutrient analysis. 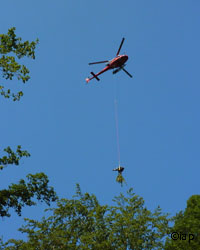 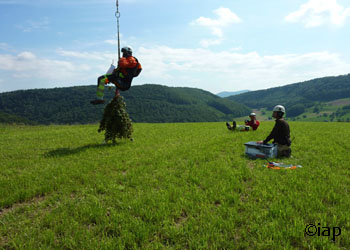 Shoot harvest by helicopter. This tv report gives an impression of the harvest 2019.

For beech, spruce and oak, we found a relationship between shoot growth and soil acidity, nitrogen deposition, drought stress and ozone flux. Drought stress strongly reduces shoot growth, in beech usually with one year delay as it can be observed in the dry years 2003 and 2011.

For beech, fructification has intensified during the last 30 years, both by frequency and by quantity. 2011 was an all-time record mast year, only two years after the previous mast year. 2014 was another very strong mast year. Fruit production in beech is related to weather conditions in the previous two years: a warm early summer (from mid June to beginning of July) in the previous year.

Number of fruits in beech. The dashed line indicates
the threshold for a mast year (150 fruits/m2) used in forestry.

Stem increment is an important measure in forestry and is also used to study effects of environmental stress. We measure stem diameter every four years at marked points with a millimeter calliper. For very large trees, we measure the girth, see video. Increments result from the difference to previous measurement. Moreover, tree rings are counted and measured on stem discs originating from regular thinnings. 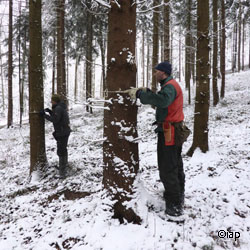 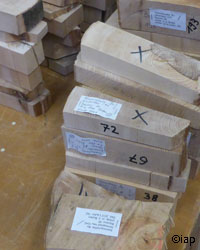 In beech, stem increments show a steady decrease over the whole observation period, whereas in spruce, stem increments are recovering after a constant decrease until 2011. By means of epidemiological data analysis, relationships between stem increment and stress factors such as nitrogen deposition, soil acidification, ozone and nutrient deficiency were evaluated. For beech reduced growth is related to the decreasing phosphorus nutrition and to interactions between N deposition and climate. There is a nonlinear relationship between nitrogen deposition and growth both for beech and Norway spruce, with maximum growth at about 25 kg N /ha/a.

Basal area increment in beech and spruce increases with increasing
nitrogen deposition up to 24-27 kg /ha/a. Above these values, increments
decrease strongly.

Volume growth on the permanent observation plots with one
tree species and on plots with mixed beech and spruce.